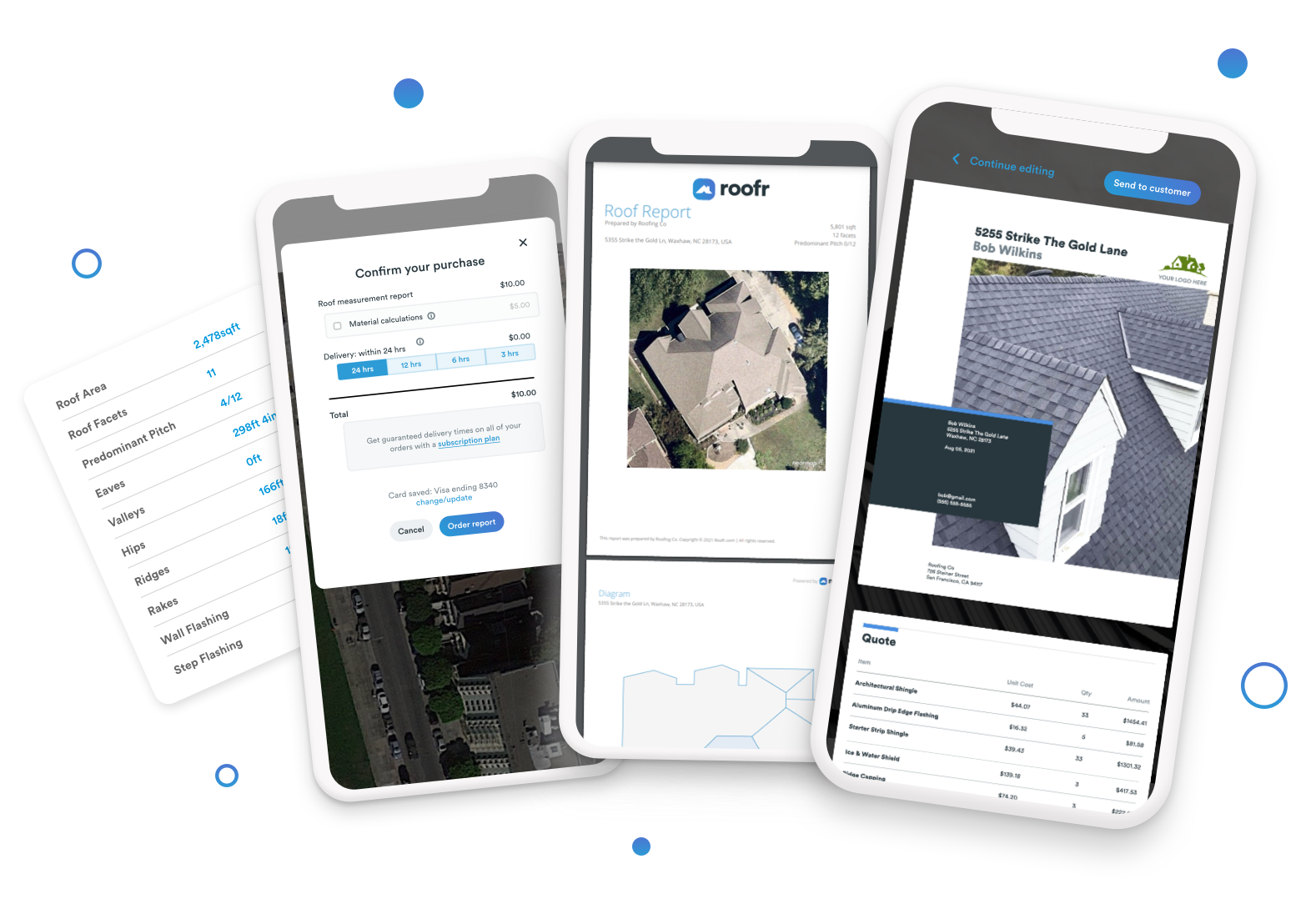 Is Roofr the right fit for you?
‍
Check out how we helped other roofers close 10x more deals in hours, instead of days.

Let's Get Started!
ROOFR REPORTS CASE STUDY
How we helped a roofer win 42 jobs in 18 hours
Justin was given 18 hours to get estimates on 42 roofs.
‍
‍Here’s how we helped him make it happen.

Problem
Justin was away with his wife doing a final walk-through (7 hours from home) on another project when he got the call: he had 18 hours to get estimates on 42 roofs.
‍
He tried his luck with other measurement software. One of them quoted him over $100 per report, and then turned him away due to the short turnaround time.

Solution
Justin needed a solution — and fast, time was moving quickly and he had to find a way to get measurements for these 42 roofs.
‍
That’s when he turned to Roofr.
‍
We were thrilled at the challenge, and couldn’t wait to help him close such a huge deal. We quoted Justin only $10* per report, with a promise to get them finished in time for his deadline.
‍
The total cost was only $420.

Result
Justin’s wife took the wheel as they drove quickly home, and he spent the whole night ordering Roofr Reports.
‍
Our team quickly turned them out, one-by-one and finished all 42 by 5am the next morning with time to spare before his deadline.
‍
With his hard work and dedication Justin won the bid and closed the deal.
‍
Justin is now an active subscriber on our Roofr Pro plan. His final thoughts?

I’ve never experienced that level of service before. If I could rate any higher than a 10/10 I would.
Total Reports
Total Turnaround Time
Total Cost
42
17 hrs
$420
ROOFR REPORTS CASE STUDY
How we helped a roofer earn $2.5M in 1 year
We chatted with Ben Morrow at ROOF TIGER to hear his success story. Last year, he had a total of $2.5M in revenue.

Here’s how we helped him make it happen.

Problem
Ben had worked with other measurement report softwares in the past, but found them expensive and timely. He wanted something accurate, and available fast.
‍
Last year, he completed over 200 roofs. That cost can add up if you’re ordering reports for each job, and not using the right measurement software.

Solution
Ben went to the roofing community and received the same feedback from multiple other roofers — try Roofr.
‍
That’s when he decided to give us a shot.
‍
We’ve helped Ben cut his measurement report costs down by over 80% while also receiving his reports in as little as 30 minutes.

Result
Ben has worked extremely hard to grow his 7-figure business, and we’re thrilled he trusts us at Roofr to help.
‍
Now, Ben is subscribed to our Pro plan, and for only $89/month he get $10 reports back within 6 hours (among many other features).

He also found a few other benefits:
‍
1. His sales team can quote faster without any lags, which means being able to close business faster than competitors, saving him and his team almost 250 hours by using Roofr.
‍
2. His team isn’t on the roof anymore. Not only is this more affordable, and efficient but he says it’s also much better for health and safety.
‍
3. He found that Roofr was even more accurate than when his team hand measured in the past.
‍
His final thoughts?

Often times business owners try to find ways to cut costs, and that’s natural. Roofr costs more money than measuring a roof yourself, but the amount of time saved and efficiency of it, far outweighs the cost of the product itself. Roofr pays for itself 10x over, and for me this is a lifetime partnership.
Total Reports
Total Turnaround Time
Total Cost
200
30 mins
$2k
Ready to get started?
Create a FREE Account!